The evolution of libraries to the 21st century (Infographic) 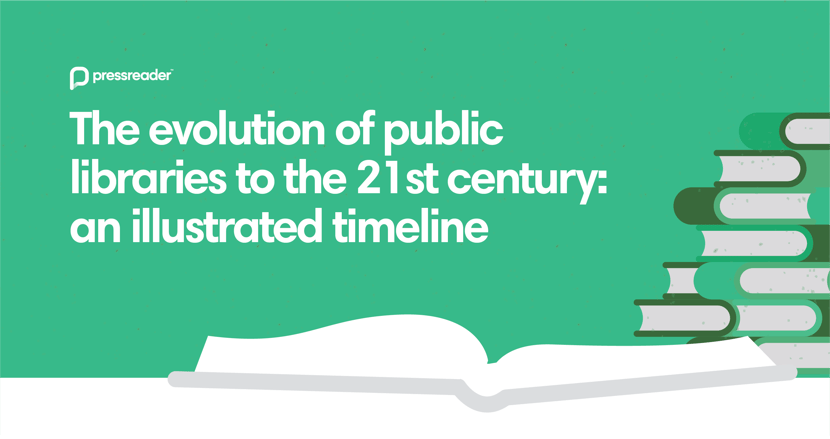 A time traveller visiting a library today would likely have a tough time wrapping her head around what she was seeing: the 21st century library has evolved far, far beyond its original state as a book repository to become a vital community hub and omnichannel content source.

As libraries enter the latest phase of their history, pivoting once more to adapt to the lingering impacts of Covid, we’re looking back at the history of public libraries to remember just how far we’ve come — and how many more exciting new opportunities for change are on the horizon.

Back in the seventh century, Assyrian ruler Ashurbanipal stowed 30,000 cuneiform tablets by topic — everything from scholarly texts to blockbusters like Epic of Gilgamesh. But ancient civilizations all over the world built their own repositories of knowledge. Egypt’s Library of Alexandria featured over 700,000 documents, while the 10th-century library in Cordova, Spain contained more than 400,000 books of its own.

Privately funded, members-only libraries continued to thrive through most of human history (even Benjamin Franklin got in on the game with his own subscription library). But in the mid-1800s, interest started brewing in sharing these fountains of knowledge more widely, and public libraries began opening around the world. In 1833, the first tax-supported library in the U.S. opened in Peterborough, New Hampshire. With the support of fundraising women’s groups post-Civil War (and generous endowments from Andrew Carnagie) thousands more follow.

For a long time, libraries were seen as places for intellectual adults (typically men) to gather. That’s right: no kids allowed. But things loosen up as the value of childhood reading and education increase. At the Brookline Public Library, the first children’s reading room opens up where the little ones are supervised by the library’s janitor.

For years, a two-card system was the best librarians could do to keep track of what book was where: each book had a card where checkouts were jotted down, and borrowers had their own personal cards with a list of their selections. But the Gaylord brothers revolutionized everything with their electrically operated book-charging machine. With their innovative system, an embossed borrower card was used to register the borrower’s ID number on a book card, which was then filed by call number.

Pneumatic tubes and dumbwaiters were all the rage. Library patrons were dazzled by the rapid-fire delivery of their requested books from the stacks — modern convenience, with just the press of a button.

As early as the 1970s, machine-readable cataloguing became the standard. A system called MARC (developed by data-processing pioneer Henriette Avram for the Library of Congress) was the national and international method of creating and sharing records among libraries — and it remained so for almost 50 years.

The Library of Congress (ever the innovators!) began several pilot projects to digitize items from both its print and non-print collections. (Its website would debut in ‘93, and today, almost 40 million primary-source files are available online from anywhere in the world.)

Carnegie Mellon University introduced the Mercury Electronic Library back in ‘91. At the time, it featured a dozen text-based databases, and a collection of page images from computer science journal articles. It may have been limited, but the storage and distribution of these files over the campus network was revolutionary and would set the stage for an explosion of digital content to come.

As libraries became a hub for more than just quiet reading, architects and designers began to rethink what a functional space might look like. Modern public library design started to change from stuffy, quiet spaces for book storage or deep concentration into light-and-airy, open-concept gathering spots for the community.

With the introduction of RFID self-checkout kiosks at public libraries, patrons became empowered to handle this low-skill task themselves, freeing up librarians and library workers to provide more important services to their communities.

Digital newsstands like PressReader begin to offer libraries a world’s worth of virtual content. Through these sorts of tools, libraries can now provide an even broader perspective of opinions and local reporting to patrons, wherever they may be physically located around the globe.

From movies to music, libraries have long offered much more than physical books. Some even allow patrons to check out hiking gear, board games or museum passes! But as technological tools become more and more prevalent in our world — if not downright necessary — they’ve also become an important inventory item for the 21st century library. Providing computers on site, or allowing for the checkout of laptops and smartphones, offers library patrons access to a wealth of digital resources.

Today’s libraries aren’t just places to consume content: they’re a place to create. With more and more libraries offering maker studios, podcasting booths, video editing software, workshops and tutorials, the library has become a vibrant creative hub where just as much content is produced as it is enjoyed.

The library’s role will continue to evolve, of course, but wherever we go next, it’s key to note that the 21st century librarian has never been just a guardian of books. They’re researchers, data analysts, information analysts, database managers, social media managers…and the evolution of technology over the past decades has only made their multi-faceted role and immeasurable value clearer.

Now that we’ve looked back, how about looking forward? Learn more about the Future of Libraries here.