Private online communities — can they work for libraries?

Recently I wrote an article about how journalism can be a catalyst that helps connect local communities and cultures in public libraries.  While writing it I started to think about online communities and their impact on individuals and society.   I also thought about their potential for libraries. Can they be a catalyst that connects librarians with patrons and patrons with each other?

Some might argue that social media already does that.  But I’m not so sure.  Despite the freedom to post comments and content from both sides, social media does not connect strangers in meaningful ways. Members share the same platforms and interests, but they typically don’t build strong relationships like we see in some other online forums.  And herein lies, I think, an opportunity.

It all started at The WELL

Most people think online communities came into existence with the birth of the public web in the early 1990s, but the fact is that people were “texting” each other long before that.

In February 1985, the Whole Earth ‘Lectronic Link (The WELL) platform was created to encourage dialog between writers and readers of Whole Earth Review magazine.  It was the brainchild of the magazine’s editor, Stewart Brand, and a physician, Larry Brilliant (who later become the Executive Director of the philanthropy arm of Google - Google.org).

The WELL’s interface was organized as a collection of conferences around subjects designed to spark lively conversation.  Hosted by a moderator/facilitator, it was an open platform that tended to attract an uninhibited intellectual gathering of people including journalists, futurists, freethinkers, and even Grateful Dead fans. With its behavior guideline of YOYOW (You Own Your Own Words), The WELL grew a loyal following which included some notable individuals such as Steve Case of AOL and Craigslist’s Craig Newmark.

Let’s not forget how embryonic the internet was at the time.  Communication was only possible using basic text, on small screens, over very slow modem connections. And yet, members were willing to pay a monthly fee of US$8 (equivalent to US$18.77 today), plus an hourly usage fee of US$2 (US$4.69 today). Impressive! 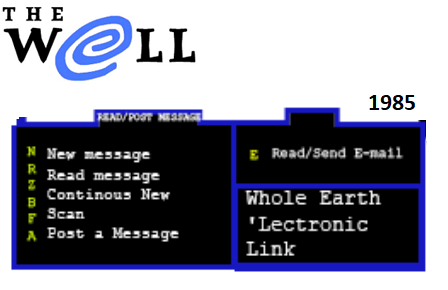 Membership today is US$15/month, and a couple of thousand people are still paying to participate.  I decided to join with their discounted trial to check it out.  After just a few clicks, I found this post (redacted to protect privacy) about public libraries.  It made me smile. 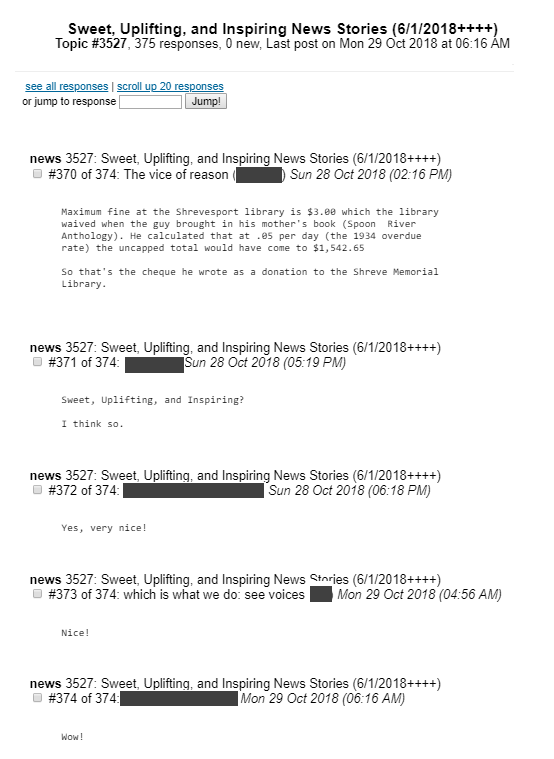 Under the Ask the Experts conference, I found a number of journalists sharing ideas and supporting each other in combating fake news -- the scourge of media literacy.  Timely! 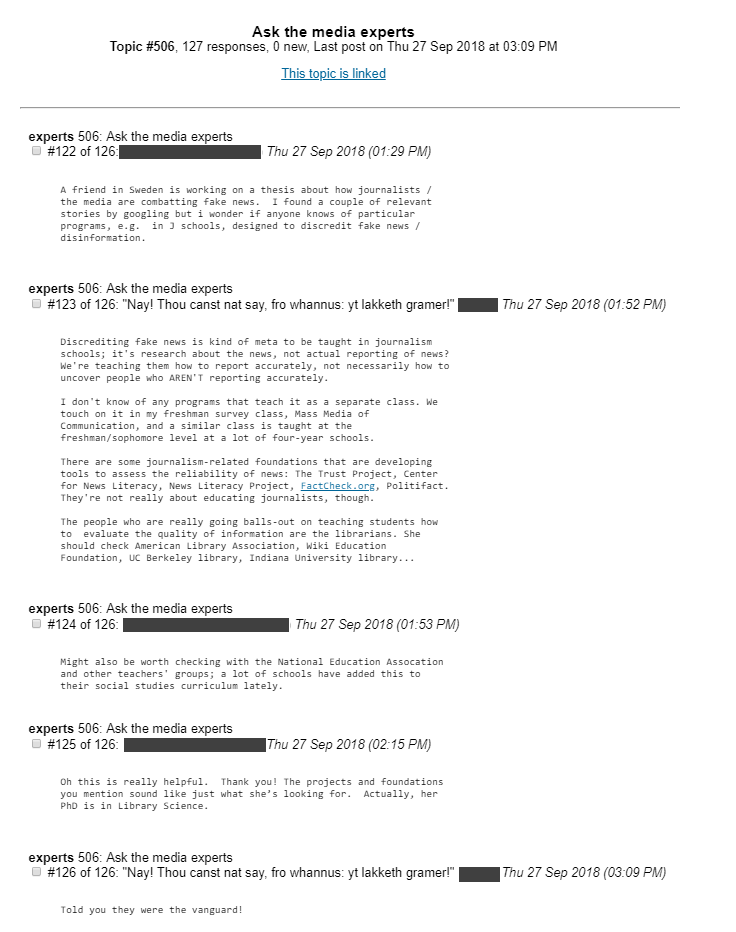 I can’t say I was comfortable with the primitive user experience, but I did enjoy the freedom of expression The WELL encouraged, and the camaraderie between members who seemed to know each other quite well.  There were no trolls or personal attacks - just honest, passionate, and sometimes profane commentary on a hot topic/issue.

I started thinking about the transition libraries are making these days from just resource centers to community centers for their patrons and wondered if they should also include exclusive access to an online community as part of their membership package.

Although most of us can probably name less than a dozen online communities off the tops of our heads (social media excluded), there are thousands, if not millions, of them all over the world.  From small business forums like Start-Up Nation to Lady Gaga’s Little Monsters, there is a virtual community for every interest, passion, and shared purpose.

Why?  Because people like to connect with like-minded people; their need to belong is an intrinsic motivator of human behavior.

Today many libraries look to social media for digital dialogue with patrons — most of which is sadly one-way.  Lots of people comment on posts, but few libraries engage with them when they do.  But is social media the best place to create a vibrant library community — a place that feels like home where library staff, patrons, students, media, academics, writers, and editors can really get to know each other, learn from each other, and trust each other?

I decided to take a look at two of the more popular digital communities (Facebook Groups and Reddit) to see what they offer and whether it’s where libraries and their communities should invest the time to truly connect.

There’s no doubt that some Facebook Groups see strong engagement.  One example is a recent group that was created so people could participate in an ABC investigation to solve a real-life mystery - the disappearance of Tegan Lane in 1996 in Australia.

Daily updates on the investigation were shared with members and tasks assigned so that people could help the ABC team crack the case.  Uniting around a common cause, the Facebook Group grew to over 30,000 members in less than three weeks.

But are Facebook Groups, in general, worth the time and effort it takes to build, moderate, and support them?  The challenge of a group being discovered among the 200 million that already exist is enough to question its viability.

But a number of groups dedicated to public librarianship are giving it a try anyway.  However, these groups are for librarians who want to connect with other librarians.  I’ve yet to find a group (not page) that encourages dialogue between libraries and patrons.  If you know of any, I’d love to hear about them.

The self-proclaimed “front page of the internet” is a highly popular daily destination for millions of users, and despite its history of controversies, it continues to grow in usage.

In the spring of 2018, Reddit surpassed Facebook to become the 3rd most popular destination in the US for a time.  The news site is back down to 5th place, but its popularity isn’t waning.  With 330 million members, it has a user base larger than Twitter — a devoted audience that spends, on average, 16 minutes a day (compared to 10 on Facebook and six on Twitter) helping to generate over 150 million monthly page views in their favorite niche communities (called subreddits).

Unlike Facebook which stays light years away from its users (Have you ever tried to contact a real person at Facebook when your account’s been hacked? Good luck with that!) Reddit gets up close and personal with its members, with Reddit staff regularly posting on the site.

Even the CEO hosts a quarterly “Ask Me Anything” (AMA) Q&A on the site.  AMA is also popular with many reporters and journalists, along with notable celebrities and public figures like President Obama in 2012 - the most viewed AMA of all time and Bill Gates who has held six AMAs so far, the last being in February 2018.

Reddit isn’t so much about discovering and sharing of content through links; it’s more about culture, the community, and the interactions between members.  You rarely see on other social media sites the level of intelligent debates Redditors have, the quality of user-generated content, or the compassion and empathy between strangers looking to help each other.  Sounds like a public library community to me!

Sure, unsavory types continue to try and infiltrate the site, but the community and Reddit management regularly deal with them through downvotes, subreddit shutdowns, or bans — efforts that studies have shown to be working.

Valued at US$1.8B Reddit only pulls in a relatively moderate revenue stream through advertising, but those ads are designed to not detract from the user experience. You won’t see any auto-play videos or flashy banners on the site.  It’s no surprise that Reddit earned the right to be automatically whitelisted by the AdBlock extension on Google Chrome.

73% of Reddit users regularly get their news on the site, but it’s not known for high website referrals.  People that treat Reddit as just another place to post links to articles or websites will soon find themselves shunned by members or, worse, banned from subreddits.  Redditors abhor spam, which is why many subreddits don’t even allow links in posts.

But for those libraries and patrons who are serious about participating in real conversations, it has potential.

Invite readers into your living room

If there is one thing I learned while digging into online communities, it’s that libraries who are serious about engaging with their patrons should, at a minimum…

For more progressive libraries that want to take community engagement to the next level, think about building your own online community where librarians can dig deeper into issues with members who are digitally engaged.  Here are some tips to get that going.

The WELL launched a new way for people to connect back in 1985.  And as much as we’ve come a long way since then, the fundamentals of building a successful online community haven’t changed.  It’s all about putting people at the top of your community agenda and making their experience one worth bragging about to their family and friends.

I’d love to hear your thoughts on whether libraries should invest in their own online communities, so please feel free to reach out to me anytime.