How libraries can support media literacy in an age of misinformation

We live in an age in which misinformation runs rampant, whether it’s scientifically unsound rumors about vaccines or conspiracies about stolen elections. Without the right fact-checking tools and media know-how, it can be a daunting task to separate the truth from "fake news".

As veteran journalist Alan Miller, founder of the News Literacy Project, observed, “We’ve lost any sense of a common narrative, of a shared reality. We not only can’t agree on what the facts are, we can’t even agree on what a fact is.”

As I noted in a previous blog post on this topic, the content we consume plays a powerful role in shaping our beliefs, attitudes and perceptions. A population that can discern which sources of information are truthful, accurate and unbiased is essential for a functioning society.

No matter how we get our news — whether it’s through social media, online reporting, television, or print and digital publications — it’s important for all of us to be empowered to decode messages in media and assess their intentions and impact.

Literacy in the 21st century

A recent Los Angeles Times article quotes Erin McNeill, founder and president of Media Literacy Now, as saying: “Media literacy is literacy in the 21st century. There is this fire hose of information coming at young people, and they have to know how to cope with it.”

Awareness of the importance of media literacy has grown substantially in recent years, and it has become an accepted part of the curriculum at schools in many places around the globe. It has been a compulsory component of public education in some countries — Finland, Sweden and Denmark, for example — for decades.

In the United States, 15 states now encourage some form of media literacy education, compared with three in 2011, according to Media Literacy Now.

Last year, Illinois became the first state to mandate it, requiring all high-school students to participate in a unit on issues such as “the purpose of media messages and how they are constructed.”

This is certainly progress toward shaping a generation of critical thinkers, but what about the other 70% of states, and other places where schools are not mandated to teach media literacy?

This is where the library has a vital role to play. Librarians are on the frontlines of the fight against misinformation and propaganda. Beyond just providing access to a range of reading materials and resources, librarians can help educate patrons to recognize false or harmful information.

Because many of us now receive the bulk of our news and entertainment through online sources, media literacy is inextricably linked to digital literacy. This past October, the American Library Association (ALA) released a report on the US federal government’s Infrastructure Investment and Jobs Act (IIJA), which includes $65 billion to support expanding broadband availability to underserved communities.

The IIJA also “provides funding to support community anchors," like the public library, "to help individuals build their skills and confidence to fully engage in and benefit from the digital economy.”

The ALA advocates that some of that funding be allocated for building digital literacy and developing informed internet users: “Libraries have expert staff experienced in providing instruction, coaching, and information resources to help people build basic digital skills, critically evaluate online information, and master emerging technologies.”

The ALA report cites a 2021 Pew Research Center survey in which “26% of respondents reported they usually need someone else’s help to set up or show them how to use a new computer, smartphone or another electronic device. One in ten reported they have little to no confidence in their ability to use these devices to do the things they need to do online.” 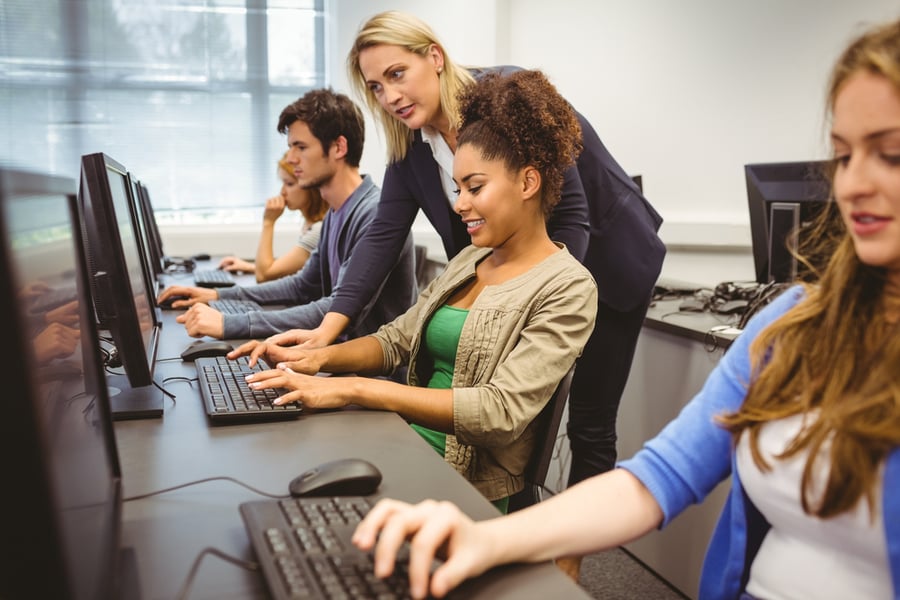 Meeting learners where they are

The library, according to the ALA, can meet learners where they are, whether they need a basic introduction to navigating the internet or are looking for more advanced instruction in coding.

One of the most important things librarians can provide to their patrons, however, is training in the skills it takes to critically evaluate the information they find on the internet, and to identify reliable sources.

Public libraries are meeting the challenge. According to a 2020 survey by the Public Library Association, 88.3% of them offer some type of programming or training for patrons on digital literacy skills: “It is much more likely to be informal, meaning one-one-one technology help provided by a library staff member or volunteer upon patron request.” Almost 85% provide this type of informal training, with 42% providing formal programs or classes in the same areas.

As we explored in our recent campaign on the subject, critical thinking and media literacy skills are essential in a functioning, democratic society. That’s because they support strong institutions, enable societies to hold those in power accountable, and help to reduce inequalities.

Librarians can help by offering free access to trusted journalism with tools like Pressreader, which provide library patrons with digital editions of newspapers and magazines.

Because the most divisive and dangerous ideologies tend to be incubated in echo chambers, it’s important for readers to engage with ideas and info from across the political spectrum. By introducing them to new tools like PressReader, librarians can open patrons’ eyes to the wide range of thoughts, ideas and perspectives to be found in journalistic content.

Learn more about how PressReader can support librarians in the fight for media literacy.