In a world of disinformation, media literacy matters now more than ever 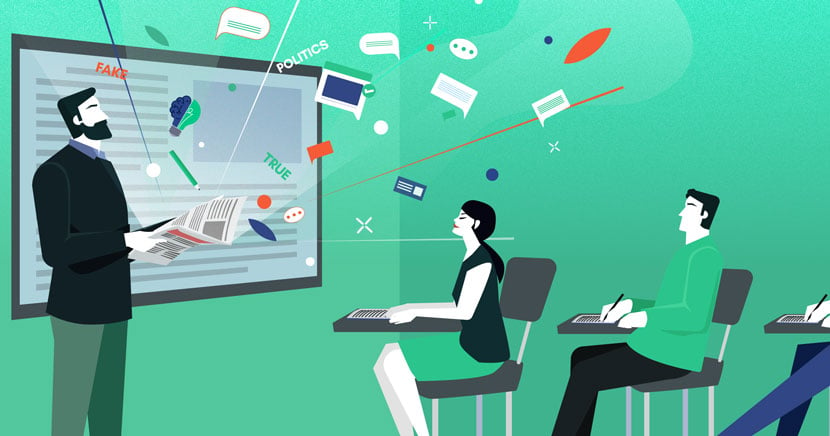 On January 6, 2021, the world witnessed what can happen when misinformation is spread unchecked. No matter how you characterize the events that unfolded in the US Capitol that day —a deliberate attempt at a coup or merely a demonstration that got out of hand — the fact remains that deadly violence was the result.

The insurrection was fueled by blatant lies about a rigged election, untruths that were given an air of legitimacy thanks to certain high-profile podcasters and spread widely on social media.

“We now all have direct access to communicate in the public sphere — and, if we choose, to create, circulate and amplify propaganda,” Mercieca wrote. “A lot of people use their social media connections and platforms to knowingly and unknowingly spread misinformation, disinformation, conspiracy and partisan talking points — all forms of propaganda. We’re all propagandists now.”

Fortunately, there is a way to avoid falling for — and spreading — propaganda: media literacy.

What is media literacy?

UNESCO has designated October 24 to 31, 2022, as Global Media and Information Literacy Week; individual countries— including the United States and Canada — are marking their own versions of Media Literacy Week from October 24 to 28.

It is clearly an important topic, but what exactly does the term media literacy mean? The US-based Center for Media Literacy offers this concise but thorough definition:

“Media Literacy is a 21st century approach to education. It provides a framework to access, analyze, evaluate, create and participate with messages in a variety of forms — from print to video to the Internet. Media literacy builds an understanding of the role of media in society as well as essential skills of inquiry and self-expression necessary for citizens of a democracy.”

Awareness of the need for media literacy is growing, but it’s clear there is still much work to be done. In a study published recently in the journal Frontiers in Psychology, researchers in Slovakia had secondary school students aged 16 to 19 read articles containing messages about the nutritional content of different fruits and vegetables. The researchers reported that 40.7% of participants did not differentiate between fake and true health articles.

An earlier study from Stanford University was designed to assess students’ skills in discerning fact from fiction. The researchers gave 3,446 high-school-aged Americans a series of exercises to gauge their ability to evaluate information found through digital sources on the open internet. According to the study’s executive summary, “The results—if they can be summarized in a word—are troubling.”

The Stanford team found that 96% of the students failed to question the credibility of an online source, while two-thirds could not distinguish between news articles and ads.

“Reliable information is to civic health what proper sanitation and potable water are to public health,” the researchers wrote. “A polluted information supply imperils our nation’s civic health.” The study called for “high-quality digital literacy curricula, validated by rigorous research,” to safeguard democracy against the dangerous consequences of misinformation.

“Education moves slowly,” the executive summary reads. “Technology doesn’t. If we don’t act with urgency, our students’ ability to engage in civic life will be the casualty.”

In years past, most media-literacy education focused on the messages delivered via such traditional means as newspapers, magazines, radio and television. It is still vitally important for an informed populace to possess the know-how to assess the information it receives from these sources.

In 2022, however, we can’t overlook the important role that social-media platforms play in the lives of young people. For many, Instagram and TikTok are primary sources of information about what’s happening in the wider world.

Lydia Bello, science and engineering librarian at Seattle University’s Lemieux Library, was recently quoted as saying, “We’ve all seen articles and research about the addictive nature of social media, about how it’s designed to engage you in order to create advertising dollars. Because of that, it’s a core place where information moves.”

According to Bellow, “Misinformation and disinformation also move quickly when there’s a strong sense of emotion attached to it. Emotions like fear or anger are ones that come to mind, but also vindication, satisfaction and a really strong desire to help. When those emotions are attached or are involved, they help move the flow of misinformation on these platforms really quickly as well.”

It starts with educators

As we saw on January 6, 2021, when the wrong messages are spread far and wide, even if those doing so have good intentions, it can have disastrous consequences. Fortunately, something can be done to stem the rising tide of dis- and misinformation, and it starts with educators.

In another Stanford study, published in the Journal of Educational Psychology, researchers set out to assess the impact of media literacy education on high-school students at Nebraska’s Lincoln Public Schools (LPS). LPS social-studies teachers were given six lessons on “civic online reasoning” designed to improve students’ ability to make to make sound decisions about info sources found on the internet.

The researchers wrote that students who received this online reasoning instruction “grew significantly in their ability to judge the credibility of digital content. These findings inform efforts to prepare young people to make wise decisions about the information that darts across their screens.”

Numerous other studies have reported significant benefits to people who have had training in media literacy:

A lived and dynamic process

One of UNESCO’s Five Laws of Media and Information Literacy states: “Media and information literacy is not acquired at once. It is a lived and dynamic experience and process. It is complete when it includes knowledge, skills and attitudes, when it covers access, evaluation/assessment, use, production and communication of information, media and technology content.”

When you teach students the principles of media literacy, you’re helping them develop critical thinking skills that empower them to understand and make sense of what the messages they read, hear and see. Wherever they get their information — be it in the morning paper, via social media or on an app such as PressReader — media literacy will help them determine its veracity and consider a story from more than one angle.

Most importantly, by educating young people on the importance of media literacy, you’re teaching them how to critically evaluate information before believing — and sharing — what they consume. Teaching media literacy sets them on the right path towards becoming aware and engaged global citizens.