Public libraries have an important role in sustaining democracy

“There is not such a cradle of democracy upon the earth as the Free Public Library. A library outranks any other one thing a community can do to benefit its people. It is a never-failing spring in the desert.”

According to the Economist Intelligence Unit’s Democracy Index, 2017 was “the worst decline in global democracy in years” with 2018 reporting that fewer people today live in some form of democracy (47.7% in 2018 as compared to 49.3% in 2017).  Only 4.5% of the world’s population live in a full democracy.

The index evaluates 60 indicators in 167 countries under the following categories: electoral process and pluralism, civil liberties, the functioning of government, political participation, and political culture.

It then classifies each country under one of four regimes: full democracy, flawed democracy, hybrid regime, and authoritarian regime. 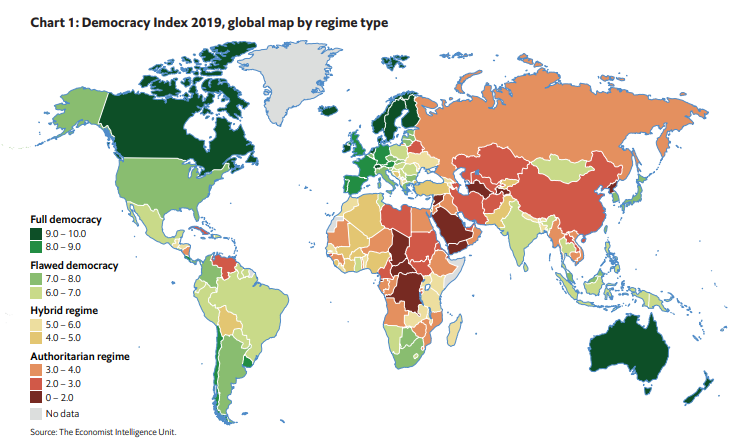 The US lost its full democracy ranking in 2016 when public trust in its institutions experienced a severe decline.  Meanwhile, Western Europe, with some of the oldest democracies in the world, regressed so much since 2006 that it has almost reached the level of its eastern counterparts.

According to the study, recessions like these manifest themselves in a number of ways.  A few include:

In exploring the role of media in democracy, the report talked about how newspapers, magazines, radio, and television continue to be important sources for accessing trusted journalism.  But it also noted that the advent of the internet and social media (which should have created “a golden age for free speech”) has had its toll on people’s ability to separate fact from fiction.

This reality is being felt around the globe and has led to a number of initiatives that address the growing deficit in media literacy, particularly with today’s youth.  The US, Canada, the UK, Europe, and Taiwan are all actively working to educate people on the importance of media literacy and its role in a democratic society.

The future of democracy and today’s youth

In an October 2018 report by Project Information Literacy, researchers studied today’s youth’s attitudes towards traditional news media in the US.

Not surprisingly, younger generations find news to be an overwhelming firehose of headlines, posts, alerts, tweets, visuals, and conversations that bombard them on their mobile devices throughout the day.

That being said, most of them are not passive participants when it comes to news consumption, recognizing that it plays a critical role in helping them understand their world, socially interact, engage with learning communities, and participate in a democracy.  College-age students say they believe that news is necessary in a democracy and recognize that engaging with it requires extra effort – more than just scrolling through a social media feed.

However, the study raises some serious concerns.  45% of students admit that they can’t tell the difference between fake news and real news; over a third of respondents no longer trust any news at all.  Needless to say, the importance of the pedagogical role of librarians to address these issues can’t be overstated.

But as much as many of them work hard at understanding and interpreting news, it doesn’t appear to be an incentive for them to practice their civic duty during general election time as compared to their cohorts in other countries.

Is inaction just an inherent part of being young?  Will our youth suddenly wake up at 35 or 40 and decide it’s time to get out and vote?

I’ve read a lot of research on the younger generations, and I don’t believe that just because their parents became more civically committed as they aged, Gen Ys and Zs will automatically do the same.  Given how different these digital natives are from previous generations in terms of their early-life experiences, I’m not so sure I want to make the assumption that they’ll follow in the footsteps of their forefathers and mothers and become civic actors in later years.

They need a little encouragement.

The role of public libraries in media literacy

For over 200 years, public libraries have been bastions of democracy.  Going beyond offering free, unfettered, and equal access to information, public librarians are staunch advocates for media literacy, continually championing efforts to nurture an informed constituency that will actively participate in the democratic process.

Many libraries give out voter registration cards, host all-candidate meetings, promote democracy through public policy, and function as polling stations during elections — all critical factors in socio-economic development.

But what about those under the legal voting age?  Is anything being done to encourage a passion for media literacy in them that will carry through to the ballot box?  Quite a bit actually.  Many public libraries are starting by educating community members around fake news - hosting events and panels, opening up media literacy forums, educating people on fact-checking tools, and posting media literacy tips on library websites, etc.

Media literacy week events are also being held across North America in partnership with the UK, and West Africa, where public and academic librarians can access resources to help them in their efforts to educate and promote media literacy in their communities and schools.

Instilling media literacy as a critical civic skill in people (of all ages) isn’t what it should be yet.  But the dedication public libraries put into their role in this endeavor has not been in vain.

In a 2018 study by the Office for Library Advocacy of the American Library Association found that 55% of voters view the public library as an essential local institution, and 53% as a source of community pride.

And more than half (56%) of voters believe it’s important to be able to download a variety of materials (e.g. news, eBooks) from the library’s website.

But asking voters to put their money where their mouths are told a different story.  When it came to budget cuts in a crisis, public libraries were not high on the list of social services to fund in 2018.  People’s opinions on public libraries being an essential service appear to be on the decline.

As more and more people get access to the internet, the more they feel empowered to manage their lives without the intervention of professionals.  They self-diagnose illnesses on medical sites, join online debates rather than physically participate in civic events, and look to social media for human connection and breaking news — websites which have proven to be ripe with misinformation, propaganda, and incitement to hatred.

The Fourth Estate and public libraries have their work cut out for them as they try to steer citizens towards the truth where events and behaviors of institutions and political leaders can be unearthed and scrutinized for evidence of corruption, misrepresentation, and collusion. 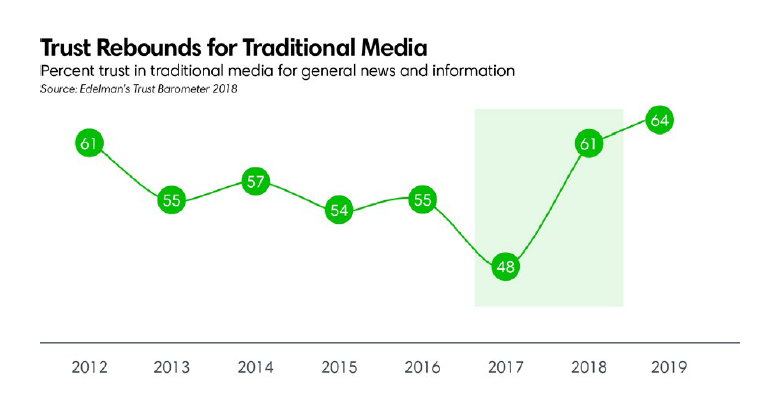 And 73% of global citizens worry about false information or fake news being used as a weapon.  So it’s no surprise that people not only want, but need, access to credible news and information through reputable publishers like: Newsweek, Los Angeles Times, The Globe and Mail, The Guardian, The Independent, Forbes, Die Burger, The Times of India, New Zealand Herald, Süddeutsche Zeitung, The Straits Times, The Economic Times, Valor Economico, Perfil, and Vanity Fair, to name just a few.

But less than 20% of them are willing to pay for digital newspapers and magazines, which is why it’s so important that libraries provide access to it for them.  The hard truth is that quality content is not free.  Someone has to pay for the newspapers, magazines, books, and journals patrons need.

Most traditional publishers recognize their role as the fourth estate and guardian of truth.  But, as for-profit companies, they are also obligated to their shareholders - the people who fund journalism.

So when those media houses think about offering their digital content to libraries, they worry about two things:

Meanwhile libraries, whose mandate is to democratize content worry about their ever-tightening budgets and the escalating costs of other resources patrons need (e.g. journals).

Library directors have tough choices to make, of that there is no doubt.  But, thankfully, thousands of them strongly believe that a democratic society cannot be built on communities afflicted with media illiteracy.  And that a strong democracy is the foundation upon which higher education can thrive - where academic research can lead to important discoveries and make fundamental impacts on communities and the planet.

They know that by giving their constituents access to trusted news sources and helping them appreciate their importance, the better off society will be.

If you would like to find out how your library can support your community with unlimited access to over 7,000 digital newspapers and magazines so they can make more informed decisions for themselves, their families, their community, and their country, let’s talk!