What libraries can learn from WeWork

|In Libraries
|By Sarina Arefzadeh

Co-working spaces aren’t revolutionary when we consider that libraries have been providing this service forever. And yet companies that do this, the biggest being WeWork, have managed to monetize it.

WeWork started with a mission to build community. Quite literally part of their mission statement is to create “a place you join as an individual, 'me', but where you become part of a greater 'we'.”

Now, unsurprisingly, when you look into most libraries, they share almost that exact mission statement. The goal of the library is to provide its patrons with resources – yes. But it’s also tasked with creating a larger sense of community and bringing people together.

So why is it that two very similar types of spaces have shown such different levels of demand from the public? Why it is that WeWork is able to sell out spaces when libraries offer almost the exact same service for free? The key word here is almost. They’re similar – but not identical. And it’s in their differences that WeWork found its success.

This plays into the concept of Social Exchange Theory: People who feel valued and taken care of by businesses are likely to feel obligated to pay the organization back. Payback could be through loyalty, or buying power. Meaning WeWork provides their customers with amazing spaces and amenities, and customers reciprocate by never cheating on WeWork with libraries or coffee shops. Great.

But fancy (and expensive) amenities can be tough for libraries to compete with – especially on increasingly tight budgets. Still, Social Exchange Theory is something libraries should keep in mind when organizing their services. Many libraries are stepping up their game by offering unique services like free digital newspapers and magazines to their patrons through PressReader.

If there’s one thing WeWork has mastered, it’s how to design beautiful workspaces. When you look at the elements they include, you can see it’s done strategically.

Most workspaces are built around the concept of Taylorism: a management system designed to optimize productivity. While this sounds fine as a concept, people aren’t as malleable as we believe them to be. The system doesn’t account for the fact that humans have more mood swings than a playground. And the right physical environment can be the difference between a meditative state, and a full-blown temper tantrum.

So what does that optimal environment look like? Au-naturel.

Natural elements and sunlight in a workspace are associated with lower blood pressure, anxiety, depression, and stress. They’re even related to an increase in job satisfaction and organizational commitment.

They really kick this up a notch through WeGrow: a classroom and curriculum designed with kids in mind. WeGrow has designed curriculum for children between the ages of two to eleven. And the classroom environment plays a huge part in the program: “Modular classrooms, tree houses and a vertical farm promote an inclusive and collaborative learning environment. Acoustic clouds natural materials and neutral colors create a calm setting for the child’s focused study.” 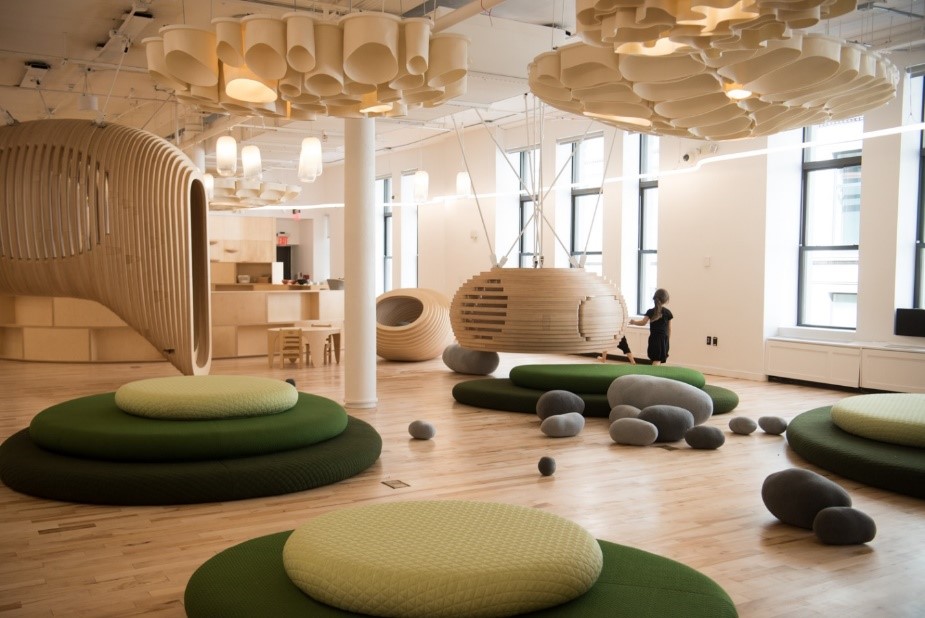 Everyone who comes to WeWork is there to grow and advance– whether that be their business, their career, or their hobby. The demographic has primarily been young professionals who want to be around other young professionals. They want people they can bounce ideas off and be productive with. Which is why word of mouth marketing has been huge for converting new customers.

Libraries are the original WeWork. The WeWork before WeWork was cool. And the truth is, libraries are already doing a lot of these things– offering amenities, creating comfortable environments, and trying to invite people in.

But it’s about consistently making small improvements to keep up with demand. Whether that means upgrading internet speed, incorporating more natural elements into the physical space, or marketing all these changes to spread the word.

Libraries don’t have to start from square one to be great. They just have to take what they have, enhance that experience, and wrap it up with a pretty bow.